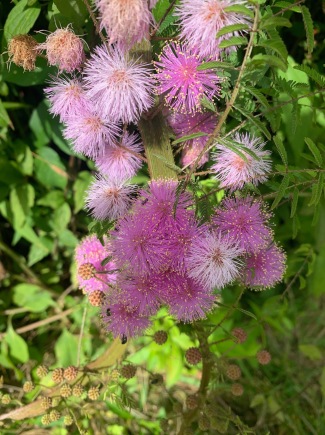 I was out for a walk in the thin swath of wild borderlands between my suburban neighborhood and the high school and I met this plant which I had not seen before. I pulled out my phone and opened up the Picture This plant identifier app and was surprised to see that it* is called a Shame Plant. It is a species of sensitive plants and its’ botanical name is Mimosa pudica.

It was given this name because when you touch the tip of the fern-like leaves, they curl inwards.

During my walk, I was listening to I’m Still Here: Black Dignity in a World Made for Whiteness by Austin Channing Brown, and right there in front of me was nature reinforcing what she was talking about — the way the shame plant recoils when it is touched, is how many white people respond to uncomfortable conversations about race in our country.

She writes, “Our only chance at dismantling racial injustice is being more curious about its origins than we are worried about our comfort. It’s not a comfortable conversation for any of us. It is risky and messy. It is haunting work to recall the sins of our past. But is this not the work we have been called to anyway? Is this not the work of the Holy Spirit to illuminate truth and inspire transformation? It’s haunting. But it’s also holy.”

Is shame or guilt keeping many white people from facing our role in systemic racism?

Brené Brown is known for her research on shame. She says, “Shame is a focus on self, guilt is a focus on behavior. Shame is “I am bad.” Guilt is “I did something bad.” She says that shame is not productive or helpful, but that “guilt is adaptive and helpful – it’s holding something we’ve done or failed to do up against our values and feeling psychological discomfort.”

Unfortunately, shame is a tactic that is often used in our society. Showing Up for Racial Justice shared The Characteristics of White Supremacy Culture which lists the damaging behaviors in our organizations. One of the characteristics is perfectionism and an example given is, “making a mistake is confused with being a mistake, doing wrong with being wrong.”

Is it possible that white people are so entrenched in the culture of perfectionism that many have a hard time untangling shame from guilt, and thus when confronted with something that we did wrong, we actually hear, “you are wrong” and throw up our defenses?

This is not an excuse for white fragility, but rather a reminder that we need to explicitly separate the person (including ourselves) from the mistake to avoid the destructive shame response. If guilt shows up, we can encourage it as an adaptive response.

“Note to white allies: When you beat up on your fellow white people for being ignorant about racism, you are NOT HELPING. Those naïve white people just waking up to racial justice? That want to do the right thing but are saying the wrong thing because they were just born to the struggle yesterday?

They are YOUR JOB #1. YOU are supposed to empathize with their white fragility, get them past their self-centering feels, and bring them over to the right side of history.

Why? SO PEOPLE OF COLOR DON’T HAVE TO.”

For the shame plant, the folding process takes between 4-5 seconds, but the unfolding of the leaflets can take anywhere from tens of seconds to up to 10 minutes. Asknature.org found that, “When younger leaves of the sensitive plant were repeatedly exposed to non-damaging stimuli, the younger leaves consistently folded completely, but over time, they decreased the time it took for them to unfold. Conversely, older leaves folded only partially while maintaining similar reopening times. This shows that the plant is able to modulate its behavior to optimize protection, energy production, and energy expenditure.

If the shame plant can modulate its’ behavior, surely we can as well. We can unfurl our shame, and do as Austin Channing Brown suggests: Be more curious than we are worried about our comfort as we do the holy work of dismantling racial injustice.

*I don’t like to refer to nature as “it” but was concerned that a substitution would be confusing for the reader.  I love Robin Wall Kimmerer’s use of “ki,” to “let our words reaffirm our respect and kinship with the more-than-human.”