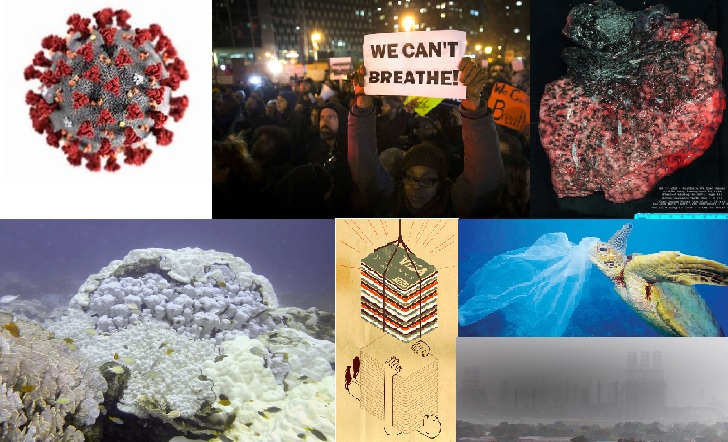 When I first read about the effects of the Coronavirus on the respiratory system my chest tightened, as my body reminded me what it feels like to have an asthma attack. The ensuing fear made my body prickle until I was able to regulate my breathing.

One of the ways that I have coped with fear throughout my life is to get curious and ask what it wants to show me.  Is it showing me how much I love something, or giving me a warning that I should heed? What came to me this time as I was worrying about what this could mean for me, my family, people I love and humanity as a whole, was the thought: “Think of all of those who haven’t been able to breathe for a long time.”

This is what came to me:

1. Eric Garner
On July 17, 2014, an unarmed black man named Eric Garner died on Staten Island, N.Y., after police officers threw him to the ground and put him in a choke hold. Garner’s last words, as recorded on a cellphone video, were: “I can’t breathe.” He repeated the phrase 11 times.

2. Black Lung Disease
Coal workers’ pneumoconiosis (CWP), also known as black lung disease or black lung, is caused by long-term exposure to coal dust. It is common in coal miners and others who work with coal.

[I] can’t breathe, you know. [I] can’t do nothing hardly like I used to,” says Edward Brown, a 55-year-old retired miner from Harlan, Ky., who was diagnosed with PMF at both Stone Mountain and another medical clinic.

“That’s all I got to look forward to is to get worser and worser,” Brown says, pausing for a deep sigh and nervous chuckle. “Nobody looks forward to dying, you know, but it’s a-comin’ and then that worries me.”

3. People are Drowning in Debt and Can’t Breathe
Debt.org found that “Debt and stress are like co-joined twins. The average U.S. household with credit card debt has balances totaling $16,748, and the average household with any kind of debt owes $134,643, according to a 2016 Nerdwallet study.

Seventy-two percent of Americans said they felt stressed about money, according to an American Psychological Association study. And 22% said they felt “extreme” stress over their finances.

The thought of getting a late payment notice doesn’t just make you uncomfortable, it gives you a rapid heartbeat, shortness of breath, dry mouth, a headache and the shakes.”

“When we consider today’s reality of stagnant incomes, limited savings and high amounts of credit card and other debt, along with frequent financial traumas such as defaults, evictions and aggressive debt collection, these findings should trigger alarm bells for our society to address the challenges with debt millions are facing,” said Scott Saunders, founder and CEO of Payoff.

The lower oxygen levels are making marine life far more vulnerable, the researchers said. Oxygen is crucial for nearly all life in the oceans, except for a few microbes.

If you can’t breathe, nothing else matters. That pretty much describes it,” said study lead author Denise Breitburg, a marine ecologist at the Smithsonian Environmental Research Center. “As seas are losing oxygen, those areas are no longer habitable by many organisms.”

5. Marine Life is Choking on Plastic
“According to the U.S. Environmental Protection Agency, in one year alone, the U.S. produces a staggering 32 million tons of plastic waste and only around nine percent is recovered for recycling. This means the majority of plastics end up in landfills and much of it never makes it that far; plastic also has a tendency to wind up in local waterways and our oceans.

There are an estimated 270,000 tons of plastic floating on the surface of the ocean and according to a recent study authored by researchers at Plymouth University, a staggering 700 different marine species are threatened by its presence. More than this, researchers believe that plastic plays a role in rising rates of species extinction.”

6.Air Pollution
Millions of Americans are being impacted by air pollution every day from coal plants, vehicle exhaust, refineries, incinerators and other many other industrial sources.

Earthjustice reports that “One in three Americans lives in communities where air is unsafe to breathe because of pollution. Dirty air persists because some polluters refuse to clean up toxic air emissions, despite the availability of proven pollution control technology. We suffer the consequences with needless heart ailments, lung disease, asthma attacks, cancer, and shortened lives.”

Our Pattern of Choices

Maybe it seems like a stretch to connect all of these issues, but I think if we look at the roots of all of these problems, they intersect and furl around our greed and lack of  reverence for all life forms.

In his NYT Op-Ed and in Emergence Magazine’s podcast. “Shaking the Viral Tree,” David Quammen explains the origins of viruses and our role in their proliferation. He writes,
“We invade tropical forests and other wild landscapes, which harbor so many species of animals and plants — and within those creatures, so many unknown viruses. We cut the trees; we kill the animals or cage them and send them to markets. We disrupt ecosystems, and we shake viruses loose from their natural hosts. When that happens, they need a new host. Often, we are it…We must remember, when the dust settles, that nCoV-2019 was not a novel event or a misfortune that befell us. It was — it is — part of a pattern of choices that we humans are making.”

He goes on to say, “We should not let this crisis go to waste. We should use it as an opportunity to demand from ourselves, and demand from our leaders, substantive change—real, drastic change in the way we live on this planet.”

Bargaining is the 3rd Stage of Grief

I’m at the bargaining stage of grief in this crisis. What if we don’t let this crisis go to waste? What it this virus builds our compassion and opens our eyes to how many beings have had trouble breathing for so long?

What if we promised this virus that we would:

Would it go away and not come back because we changed our relationship with ecosystems and humbly recognized our interconnectedness with all life?

Robin Wall Kimmerer writes, “We need acts of restoration, not only for polluted waters and degraded lands, but also for our relationship to the world. We need to restore honor to the way we live, so that when we walk through the world we don’t have to avert our eyes with shame, so that we can hold our heads up high and receive the respectful acknowledgment of the rest of the earth’s beings.”

May we no longer avert our gaze and use this crisis as an opportunity to repair our relationship with all living beings.

← Learning from Nature to Create a More Peaceful World

4 Comments on “We Can’t Breathe”