Reflections on The People’s Climate March 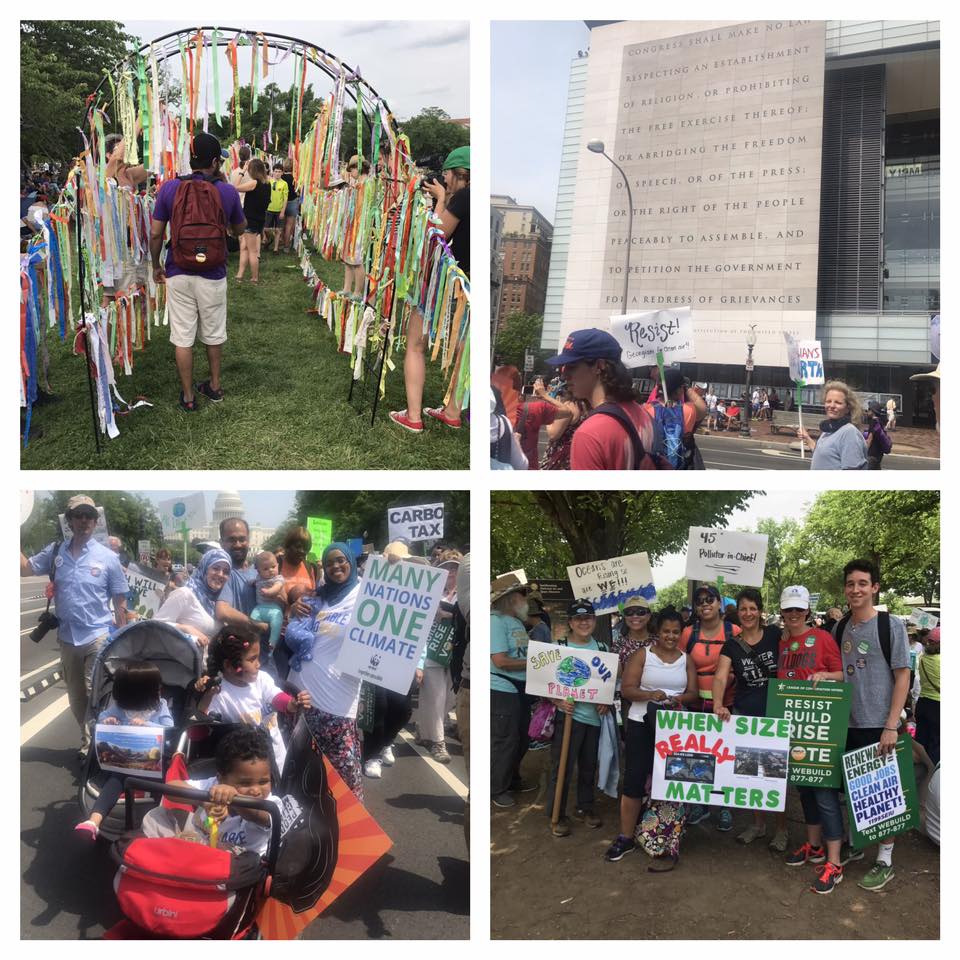 I often vacillate between the sacred and profane and my experience at the People’s Climate March was no exception.

When the line-up came out for the march, I was so moved by the care and collaboration that went into the plan. I looked at it and thought that I could be with the Guardians, Keepers of Faith or Many Struggles, One Home.

Part of me felt most drawn to the first two, but the sign that I was inspired to make and the fact that I was marching with our local Sierra Club chapter, landed me in the last section.

This is an Uprising edited by Engler and Engler, discusses Gene Sharp’s 198 Methods of Nonviolence and how powerful public demonstrations can be, especially when humor is used. While I was not as ambitious as Otpor!’s “Dinar za Smenu” (Dinar for a Change) I was inspired to make (what I thought were) humorous signs that made the point that the media, and thus our collective society, spend too much time focusing on  inconsequential issues. Think about it, how much air-time has been spent in recent months on the size of Trump’s hands (and the implied innuendo) and inauguration crowds, versus how much time has been spent showing how much the sea ice has melted? From the reactions that I received, it appeared that they did make people laugh and see the ridiculousness of what is covered on the “news.”

I was a literal walking contradiction, as I held these signs up high, all while wearing my “Water is Life” shirt about protecting the sacred. I enjoyed making my point, but my heart was truly opened when I saw the beautiful earth prayer ribbons written by people all over the world, and as I stood in the intersection of humanity, all out in the streets on a blistering hot day, to rise up together as the earth’s immune system.

As impressed as I was by the thoughtfulness of order of the march, the consequences were that I ended up in the very back of the march. It was a completely different experience than I had at the Women’s March in Atlanta and the Native Nations March in DC where I was closer to the front and privy to the action. This time, I was exhausted because we were still standing, waiting to start, while many groups were already past the halfway point. A bit later, I felt left out because I couldn’t participate in the chant around the White House, ““Resistance is here to stay, welcome to your 100th day!” because I was still blocks away (laughing at how Trump Hotel was lined with port-a-potties).

While I was feeling this fatigue and frustration, I was also extremely grateful that my white privilege was at the back of the march, because it meant that things were changing on a structural level. Indigenous people, people of color who were subject to environmental injustice (which is often the case), and immigrants were leading the way, and the part of me that identifies with the sacred was elated by this long overdue shift towards equality.

Many people, and I used to be one of them, question the effectiveness of mass protests, and the inherent hypocrisy of environmentalists traveling thousands of miles in gas-filled buses to protest fossil fuels and the footprint left by thousands of demonstrators. Despite the attempts to minimize waste by having water stations for reusable bottles, the 200,000+ crowd and 90 degree temperatures meant that supplies ran out and people had to buy water and sports drinks from the local businesses to keep from becoming dehydrated.

I can tell you that most people there felt the tension of these choices, but ultimately we decided to have the courage and vulnerability to stand there in our discomfort, because in both of these examples – lives depend on us making the best, if not perfect, choice. We are taking the long view, so that one day, when we gather together (hopefully in celebration) we can transport ourselves there with clean energy and rehydrate with edible water bottles. But that future isn’t realized if we don’t make these compromises along the way.

In addition to drawing world-wide attention to the issue of climate change and demonstrating our unwillingness to back down from this inconceivable fight for our survival, this mass gathering for the climate march showed me that people are the ultimate example of renewable energy. If we can harness all of the creativity and power on display at the march, we will be able to implement the solutions to reverse global warming. As Paul Hawken, said when I heard him speak last week about his book Drawdown: The Most Comprehensive Plan to Reverse Global Warming, “It’s not game over. It’s game on!”

3 Comments on “Reflections on The People’s Climate March”